When we think of fish migration, we typically think of salmon. However, the Susquehanna River is home to several migrant fishes–or, at least, it used to be.  Before there were dams on the river, American shad used to run upriver in the millions (I don’t know about you, but I’ve never seen a fish run, only swim!). Every spring, adult shad travelled up the Susquehanna River to their spawning grounds. The shad fishery was a major industry here, and our Shad Wars River Roots blog takes a deeper dive into that history here. This blog will, instead focus on another, rather mysterious species that migrated through the Susquehanna: the American eel.

The American eel, at first glance, may cause people to have an immediate fear response, due to the similarities this creature shares with snakes. Maybe I would gasp, too, if I reeled in a 5-foot-long wiggling stick! After the initial startle, I dare you to look at them eye to eye. You may find yourself agreeing that these little critters are quite cute with their pectoral fins that look like Dumbo ears. 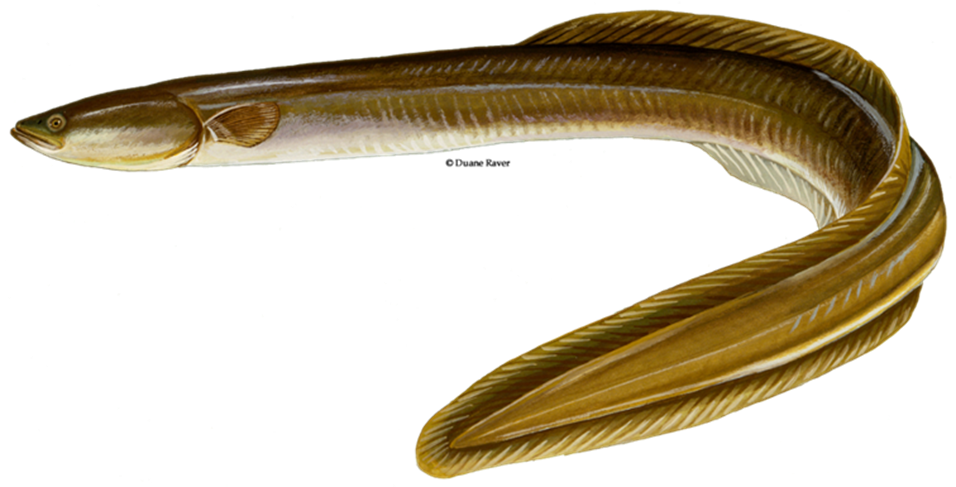 American eels do not have the ability to shock like electric eels. In fact, electric eels are not actually true eels at all! They are more closely related to carp and catfish than they are to other eels. The American eel is a true eel, however. They have a thick coat of slime that they use for protection (slightly more subtle than an electrical shock!). A slimy layer of mucus makes it harder for predators to grip them and even protects them from some bacteria.

American eels have a surprisingly mysterious lifecycle. For a very long time, no one knew where it began, because a pregnant female eel had never been caught. As it turns out, baby eels look drastically different than adult eels! In the larval stage, leptocephalus, they are long, leaf-shaped, flattened sideways, and transparent.

This shape may help them float along with the ocean currents, because as larvae eels drift for thousands of miles along currents for about a year to reach the coastlines where they transform into “glass eels”. As they begin to migrate upstream, they become “elvers”. When the eels reach freshwater, they transform yet again into “yellow eels”. Both the elver and yellow eel life stages closely resemble an adult eel. Researchers discovered this information by retracing the eels’ “footsteps” via boat. Researchers took samples of eels floating towards the east coast of North America, searching for smaller and smaller eels until they could narrow their breeding grounds down to the Sargasso Sea.

The Sargasso Sea is near the middle of the Atlantic Ocean, near Bermuda and east of the Bahamas. It was named after its massive seagrass beds of sargassum seaweed. The Sargasso Sea is an ocean gyre, where currents come together in massive swirls, exactly like the Pacific Ocean’s well known Great Pacific Garbage Patch. Adult American and European eels spawn in the Sargasso Sea for the first and only times in their lives. Sexually mature females can contain more than 2 million eggs! Eel embryos typically hatch within 19 days if the water is near 59oF. 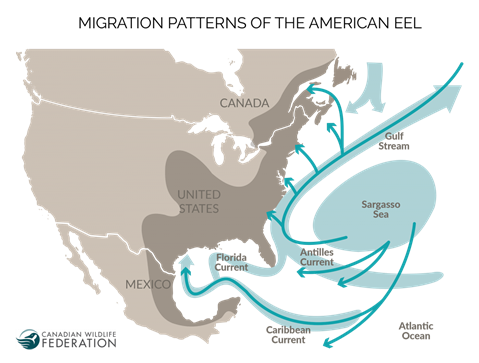 American eels usually reach sexual maturity between 2 and 6 years of age depending on environmental factors. When eels are ready to begin the journey to spawn, they make their way downstream towards the Sargasso Sea in the fall. It’s quite impressive that they know exactly where they hatched out of an egg after floating thousands of miles as a “leaf” in the middle of an ocean. This journey is so incredibly exhaustive that eels can absorb their digestive tract to provide extra fuel, as if they already know that they will die after spawning.

American eels are North America’s only catadromous species. That means that they’re born in saltwater, grow up in freshwater, and then return to saltwater to spawn. This is the opposite of the anadromous American shad, who are born in freshwater, grow up in saltwater, and spawn in freshwater. We humans have not been so kind to eels, maybe because we think they look like slimy alien snakes. Humans are one of the American eels’ biggest threats. We target multiple stages of the eel lifecycle. People catch juvenile eels and sell them as bait or for aquaculture, and we target adult eels as a food source.

Native Americans fished for eels long before Captain John Smith made it to this region. The Susquehanna is full of old eel weirs, underwater landmarks still standing after centuries. Native American constructed ‘V’ shaped eel weirs, built from stacked river rocks. A simple but effective way to funnel and catch American eels during migration each fall. As the eels swam downstream, the walls of the weir funneled them to a narrow point where they could be captured in traps or speared more easily. Native Americans smoked the eel meat to be used all winter. This was likely the most important source of protein and calories for local people for several thousand years.

The Swatara Township crest contains the symbol of an eel on its shield, because Swatara translates to “where we feed on eels”. Eels used to make up over a quarter of the total fish found in the Atlantic coastal streams. Once European settlers started to commercially fish for eels until the early 1900s and built major obstructions, that changed. Considered a delicacy in Asia and Europe, many eels caught in the Chesapeake Bay region today are exported overseas. They are served at your local Japanese restaurants that make sushi here in the United States as well! In Japanese, freshwater eel is known as unagi, and saltwater eel is anago. Maine fisheries averaged $1,500 per pound (over a 10-year period) for live, fresh-caught elvers to supply aquaculture farms in Asia. Overfishing of native eel species in East Asia and Europe, along with strict fishing restrictions, have increased the overseas demand for American eels.

Large migratory obstructions, like dams, are also detrimental to eel populations. Four hydroelectric dams are located on the lower Susquehanna River. The 94-foot-tall Conowingo Dam stands only 10 miles from where the Susquehanna dumps into the Chesapeake Bay. Tens of millions of dollars have been spent building fish ladders to carry shad over the dams, but shad migrate during the day and follow strong midriver flows. Small, juvenile eels migrate at night along slower currents near the rivers’ edge, so the fish ladders don’t help them. Surprisingly, there was quite a cheap solution to this problem (when compared to millions spent on ladders). Conowingo Dam established an “eel-way,” an 18-inch ramp that runs from the base of the river to a holding tank. A pipe pumps 6 gallons of water per minute next to the ramp, mimicking an entrance to a small stream and attracting eels. Since 2008 biologists, have used this sort of system to truck more than 2 million eels upstream. In 2021, more than 620,000 were able to return to their previous habitats this way. But let’s not forget, adult eels travelling back downstream to spawn must pass the hydroelectric dams again, and this time it will most likely be through a turbine.

One type of freshwater mussel relies almost exclusively on eels. The Eastern elliptio mussel is the most common freshwater mussel in the Susquehanna River. During the final stages of reproduction, female mussels emit a parasitic larva that attach themselves to the eels’ gills. These larvae drop off after 2-4 weeks and become juvenile mussels. This mussel can live up to 100 years, and adults can filter up to 15 gallons of water a day!

The upper Susquehanna has a good population of mussels, but they are aging. Not enough eels are making it far enough upstream to assist with mussel reproduction. It’s estimated that 280 million elliptio mussels could filter 2-6 billion gallons of water a day, which would remove nearly 78 tons of sediment (a major contributor to negative water health). Since the Susquehanna River provides nearly half of the freshwater flowing into the Chesapeake Bay, eels and mussels are the perfect duo to Save the Bay! More eels = more mussels = cleaner waters.