The river is home to many different species of fish including, smallmouth bass, walleye, catfish, musky, northern pike, American shad, and many other smaller panfish. The American Shad on the Susquehanna River has the most interesting and violent history.

Each year millions of migratory shad flooded the river from the Atlantic Ocean and surged upstream to reproduce in the Susquehanna’s North Branch at Cooperstown, NY and streams near Lock Haven. Men and women all along the river from the Chesapeake to New York state relied on the abundance of shad. Known as the “poor man’s salmon,” shad runs lasted for about a month. That brief season provided a burst of protein after a long, lean winter. It also caused disputes, battles, and violent riverfront confrontations for nearly a century.

Shad are a schooling ocean fish. When they migrate north into fresh water to spawn, buck shad (males) usually come first followed by roe shad (females). Roe shad are generally twice the size of buck shad. Temperature of the water decides when the journey begins. The water must be warmer than 40 degrees Fahrenheit. Shad runs happen all along the Atlantic Coast beginning in January in Georgia’s rivers while in the Northeast the runs are in May or June. However, you will not find a mature shad spawning in Georgia one year and Pennsylvania the next. They will return to their natal river to spawn. That means each river has a distinct spawning stock. On the Lower Susquehanna River, shad runs are normally between mid-April and June.

Schools of fish will follow the deep channels of the river as they travel north. When they reach their spawning location they will normally spawn between sunset and midnight. Shad prefer a gravel or sandy bottom in 4-8 feet of slow-moving water. They are sensitive to light so the brightness of a full moon on a clear night could delay the spawn. Spawning behavior includes a pairing of male and female shad. The pair will swim close together releasing their eggs and milt simultaneously. The shad will normally descend from the river back to the ocean shortly after spawning. 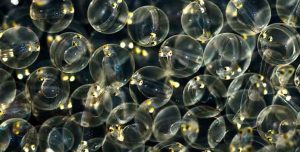 Shad eggs can take between 7 and 21 days to hatch depending on the water conditions. Larvae drift in the river until they mature into juveniles. Juveniles will stay in the river a few months feeding on zooplankton and insects. By late fall, most juvenile shad will migrate south of coastal waters. These juveniles will not return to the river for three to six years until they are ready to spawn.

Native Americans used nets and weirs to catch shad. They would nail the fish to cedar planks and slow cook it over and open fire. In the course of cooking, the tiny shad bones dissolve. The cooking technique was passed to early English settlers and generations to come and is commonly called shad planking. European colonists also kept barrels of salted shad in their homes.

It was such a valuable staple that it was one of Colonial America’s first exports back to Great Britain and Europe. One Columbia man wrote ‘they were so plenty that five to ten dollars per hundred was esteemed a fair price.’ It was so important that access to shad fisheries could be used to settle bills and fathers willed islands and fishing spots to their sons.

Fresh from the Susquehanna, nailed to a smoking pine plank, broiled thereon before a hot fire, brought to the table on the wood on which it was cooked; steaming hot, brown and crisp on the outer surface; white, juicy and flaky just underneath and clear through, with an indescribably delicate flavor possessed by a shad cooked in no other way, served with crisp, green lettuce and Saratoga chips; served in a cool dining room looking out toward the broad bosom of the sun-kissed river; gentle zephyrs playing in and out of the open windows, a pleasant, jolly, brilliant company, full of jest and song and story-there is nothing under the blue skies that can equal it, save the except more of the same. It is a revelation.  – Pittsburg Dispatch, May 13, 1889.

As early as 1700, the province of Pennsylvania had passed legislation relating to fishing access. The first law barred the construction of fish weirs that stretched from shore to shore. The law was not specifically aimed at protecting the fish populations on their migration, rather, it was intended to make fish equally available to everyone that lived along the waterways. In 1731, the Pennsylvania Assembly received a petition from Lancaster County residents. The Conestoga Creek had been dammed by Stephen Atkinson to for his fulling mill operation. The petition complained that the great quantities of fish once available up stream were stuck below the dam. Atkinson offered to leave a 20-foot-wide passage to allow fish to pass upstream. Before the Assembly took any action, locals took matters into their own hands and destroyed the dam. 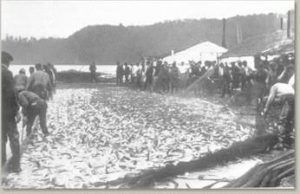 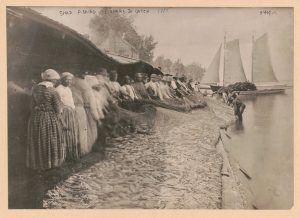 In 1761, the Pennsylvania Assembly would pass a series of laws for the preservation of fish in the Susquehanna. It called for weirs, racks, baskets, pounds, and similar devices erected in the river to be destroyed and prohibited building in future years. As seines and large fishing operations became popular in the nineteenth century, the farther north you were on the river the less fish you were likely to catch. In 1814, Pennsylvania northerners complained that fisherman in Columbia were ‘constantly scouring’ shad that most had no chance of making it farther upstream. The Pennsylvania Legislature divided the river into sections and staggered fishing days – though they never enforced it.

About 50 years later, public sentiment demanded the government intervene to protect the shad runs. Between 1825 and 1840 multiple dams had been built on the Susquehanna: one at Columbia and two more on West Branch and Juniata tributaries. The Columbia dam was completed in 1839 and although the state had legislation requiring approval of the engineering plans there was no fishway constructed. A fishway would not be added to the Columbia dam until 1866, so for over 25 years frustrated fisherman complained. Legislation edicts were ended when a proper government agency was created in 1866 and expanded in 1871 – it is now known the Pennsylvania Fish and Boat Commission.

Each spring, newspapers announced the shad run had arrived as fisherman’s wagons loaded down with fresh fish rolled into towns. In 1882, the Lancaster Daily Intelligencer reported that fish dealers throughout the streets of the city doing “lively trade” selling Columbia shad for 25 to 65 cents a piece. Between 1831 and 1850, fisherman caught 41,000 metric tons of shad every year in the Chesapeake Bay region. That is equivalent to the weight of a humpback whale taken from the bay every year! As commercial fisheries expanded to answer the demand for shad and overfishing decreased the shad population, it is easy to see how a disagreement over shad could quickly turn violent.

Violent outbursts over shad were common every spring from the mid-1700s through the Civil War. Weapons ranged from rocks to rifles – and allegedly a cannon – and their actions became locally referred to as the shad wars. Fishermen would fight over best fishing places, accesses to river islands, and mill dams restricting good fishing. Nearly all the confrontations were on the lower Susquehanna River – south of Columbia. There was a great number of islands to be used for fishing on this section. Islands could be bought and sold like any other private property and were highly desirable locations for good shad fishing.

In the 1850s, a series of incidents became known as the Great Safe Harbor Shad War. In the most heated incident, Columbia seine fishermen traveled down to Safe Harbor to destroy weirs, baskets and other ‘shad-killing contrivances’ in use. The Columbia invaders were met by men with rocks and boat poles as their weapons. It is said that the Columbians retreated under threat of fire from a Griffin cannon made at the nearby Safe Harbor Iron Works. The Safe Harbor men long denied using the cannon. At the end of the decade, six Columbia fishermen attempted to take a fishing island by force. It was claimed by residents of Washington Boro. After a physical exchange, the Columbia men returned to town and charged the Washington Boro men with causing a riot. The judge convicted the Boro men with assault and battery and fined them $5 each. (Columbia Spy, June 16, 1860)

In 1862, a group of anglers from Turkey Hill area were caught poaching shad on an island and fired upon a group of York county men who came to remove them from the island. In the exchange, the Turkey Hill men fired four shots, killing one York Countian and seriously wounding another. A court jury sent one of the Turkey Hill men to Eastern State Penitentiary for 11 ½ years for second-degree murder. (Columbia Spy, November 26, 1862) 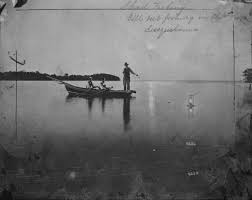 Laws had also been passed to prohibit fishermen hauling in shad nets within a half-a-mile from any dam. At the Columbia dam, many locals were continuing to fish just south of the dam. In April 1880, five state fish wardens were sent to Columbia to break up the illegal fishing. The fish wardens were met on the river with distain and their boat was overturned. They managed to swim to the canal tow path and shore but were greeted by more locals carrying “black-jacks, empty bottles, and sections of rock. The wardens reached their hotel nearly more dead than alive, and the landlord locked them in their rooms where they could patch up their cracked heads and listen to the serenades of the fishers under their windows.” (Columbia Spy, May 1, 1880) In a state report later recounting the ongoing illegal fishing at Columbia, they noted that a half-dozen or more delinquents eventually were imprisoned and fined.

In an 1879 report form the Fish Commissioners, there were 48 fisheries in the 5 miles between Columbia and Turkey Hill. There were another 200 fisheries between Turkey Hill and Havre de Grace, Maryland. Over fishing had become a significant issue. The fish commission spent the next decade creating hatcheries along the lower Susquehanna to increase shad populations. They stocked the river with over ten million juvenile shad between 1889 – 1891. The real end to commercial shad fishing would come as a result of the hydroelectric dam construction at Conowingo, Holtwood, and Safe Harbor. Although fishways and stocking programs help boost shad populations, the shad runs of the nineteenth century will likely never return to the lower Susquehanna. 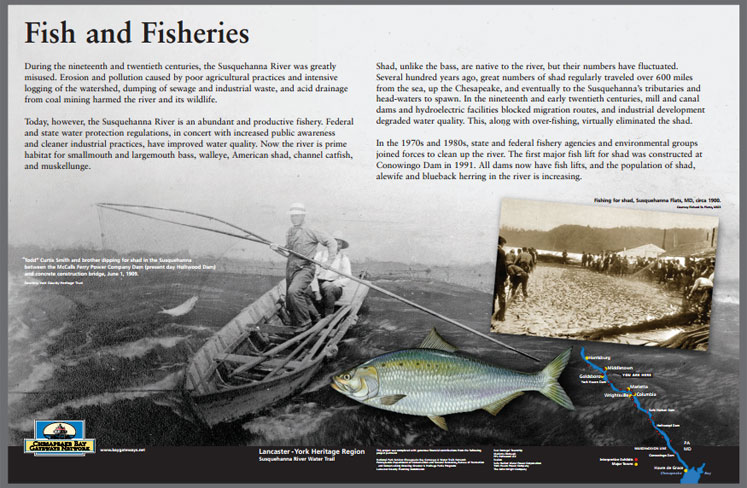 Crable, Ad. “Shad Wars: A Long, Violent Period in Lancaster County over a Fish in the Susquehanna,” March 31, 2018. https://lancasteronline.com/news/local/shad-wars-a-long-violent-period-in-lancaster-county-over-a-fish-in-the-susquehanna/article_48c6e18a-3281-11e8-bbdd-c3310badc12c.html.