During the nineteenth century, industrious people and businesses, including many lumberyards, filled the banks of the Susquehanna. For decades, a remarkable and heroic American named William Whipper managed some of those lumberyards. Prominent in national politics, highly successful in business, and a well-known leader in the reform movement, Whipper personally saved hundreds of people seeking freedom from the oppression of slavery. William Whipper was everything nineteenth-century racist propaganda asserted he could not be. Due to the sensitive nature of his work as a Black abolitionist, many of his achievements went unrecognized during his lifetime.

Like many people in the Black community, Whipper faced many obstacles resulting from the racial divide. This did not stop him from being successful in business ventures or in fighting valiantly for the rights of Black people to be treated as full citizens and to be free from bondage. The lumberyards were located close to the entrance of the historic Columbia Bridge. William Whipper’s home was near the bridge entrance, and he often awoke in the night to help people seeking freedom from slavery enter Columbia. He would feed, house, and help them to freedom. In a letter to fellow abolitionist William Still, he wrote:

“I knew it had been asserted far down in the slave region, that Smith and Whipper, the Negro lumber merchants were engaged in secreting fugitive slaves.  And on two occasions attempts had been made to set fire to their yard for the purpose of punishing their illegal acts.”

“I know I speak within bounds when I say that directly or indirectly from 1847 to 1860, I have contributed from my earnings one thousand dollars annually, and for the five years during the war a like amount to put down the rebellion…I would prefer to be penniless in the streets than to have withheld a single hour’s labor or a dollar from the sacred cause of liberty, justice, and humanity.”

William Whipper was born in 1804 in Drumore Township, Lancaster County. His mother, Nance Whipper, was a servant in Reverend Francis Alison Latta’s household. Sources often obscure information about his childhood, but family genealogical records have recently identified Latta as his father.  Reverend Latta was principal of a Latin school in Drumore.  This highly regarded school was started by William’s grandfather, Reverend James Latta, in 1770.  William’s privately tutored education was said to be equal to the education given to his white half-siblings, and he often referred to the superior education given to him by his father.

As a young man, William moved to Philadelphia and at first made his living as a steam scourer (at the time, a new process for cleaning clothing). Later, he opened a grocery store that supported temperance and sold mercantile goods that were created free of slave labor. The young professional and hard-working entrepreneur soon joined Philadelphia’s intellectual elites. He had connections to organizations and activities associated with the Bishop Richard Allen, founder of the African Methodist Episcopal Church. He became a valued member of new intellectual societies, including the “Reading Room Society for the Men of Colour who are Citizens of the City and Liberties of Philadelphia.”  That society chose Whipper to draft their constitution. He would later become editor of The National Reformer, a magazine from the American Moral Reform Society dedicated to purifying individuals and society at large.

In the aftermath of a rebellion of enslaved Virginians in 1831, prosperous people of color faced turbulent opposition all over the country.  One of the greatest losses was the ratification of a new Pennsylvania state constitution that denied Black men, who previously voted as lawful citizens, of that right.  White-led riots occurred in Philadelphia and Columbia and anonymous death threats were received by Black businesspeople like Columbia’s Stephen Smith.  Indignities were common.  For example, Smith was the largest stakeholder in the Columbia-Wrightsville Bridge Company, but he was not allowed to serve as its president.

William’s role as a national leader was demonstrated in 1833 when he was chosen to write and deliver the Philadelphia eulogy for William Wilberforce. Wilberforce had been the face of the victorious abolition movement in Great Britain. In his address, Whipper not only exalted Wilberforce, he also castigated the American Colonization Society, an organization formed to encourage free African Americans to move to Africa, as “the arch enemy of liberty.”  It was a dangerous time to be so bold.

William Whipper left Philadelphia and settled in Columbia in 1835. In 1836, he married Stephen Smith’s only daughter, Harriet. The following year they welcomed a daughter, who they also named Harriet. Whipper spent three decades in Columbia. He managed lumberyards, investments in the Columbia and Reading Railroad, and other properties by day and operated a crucial Underground Railroad station at night. In Columbia, William had a unique opportunity to offer direct support to freedom seekers. Many freedom seekers found employment in his lumberyards, as it was excellent work for men of color that paid a living wage. The lumberyards also functioned as a clandestine station in a Black Abolitionist network involving transporting freedom seekers in railway cars. Whipper worked with the successful Black businessman William Goodridge, who operated the Reliance Line in York. Goodridge and Whipper built secret compartments in their railcars to aid freedom seekers on their journey. Seekers often moved from York to Columbia and then on to Philadelphia.

He wrote of these activities:

“…the Susquehanna River was the recognized Northern boundary of the slave-holding empire. The borough of Columbia, situated on its eastern bank, in the county of Lancaster, was the great depot where the fugitives from Virginia and Maryland first landed. The long bridge connecting Wrightsville with Columbia was the only safe outlet by which they could successfully escape their pursuers…my house was at the end of the bridge, and as I kept the station, I was frequently called up in the night to take charge of passengers. On their arrival they were generally hungry and penniless. I have received hundreds in this condition; fed and sheltered from one to seventeen at a time in a single night…I passed hundreds to the land of freedom.” 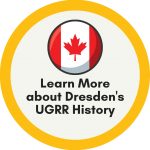 Following the passage of the Fugitive Slave Act of 1850, conditions in Lancaster and Philadelphia became even worse for African Americans. In Columbia, Southerners came to kidnap free black people who had been formerly enslaved.  This prompted Whipper to consider emigrating to Canada. In 1853 he traveled to Ontario, purchased property, and started a business venture in the town of Dresden. A few of his immediate family, including his sister, moved there permanently. William visited Canada annually and recommended Canada as the only haven for freedom seekers.

He later wrote in a letter to William Still, “I always persuaded them to go to Canada, as I had no faith in their being able to elude the grasp of the slave-hunters. Indeed, the merchants had the confidence of their security and desired them to remain; several of my friends told me that I was injuring the trade of the place by persuading the laborers to leave. Indeed, many of the fugitives themselves looked upon me with jealousy and expressed their indignation at my efforts to have them removed from peace and plenty to a land that was cold and barren, to starve to death.” Dresden was a hub for freedom seekers as there was agricultural land and lumber trade under the passionate leadership of Josiah Henson. His memoirs inspired author Harriet Beecher Stowe to write Uncle Tom’s Cabin.

Whipper returned to Philadelphia after the Civil War, but still held on to some of his Columbia properties. He continued to advocate for the rights of African Americans through newspaper articles and speeches. These efforts culminated in 1866, when William joined Frederick Douglas in an historic meeting with President Andrew Johnson to advocate for Black suffrage. Although Johnson rejected their proposal, Congress passed the 15th Amendment, that gave Black men the right to vote, four years later. Sadly, in actual practice, state and local laws and threats of violence often kept Black men from doing so.

William Whipper died in Philadelphia on March 9, 1876, as a respected entrepreneur, abolitionist, and thinker. He was born in Lancaster County, and during his time in Columbia he helped hundreds of freedom seekers.  But he was more than just a local hero.  His actions before and after the Civil War contributed significantly to the fight for freedom and equality for Black people throughout the nation.

Learn More about United States History & the Era of Reform from the Gilder Lehrman Institute of American History.

Census & Ancestry Information was found using FamilySearch.org and Fold3.com which may require creation of a free account to access.

Baptist, Edward E. The Half Has Never Been Told: Slavery and the Making of American Capitalism. New York: Basic Books, 2016.

Ellis, Franklin and Samuel Evans. History of Lancaster County, Pennsylvania, with Biographical Sketches Of Many Of Its Pioneers and Prominent Men. (Philadelphia, Everts & Peck, 1883): 796.