Each year, an annual event makes its way to the lower Susquehanna River. Those who live and work along the river know about the event, and many of those local folks have a story about it. It gets a lot of attention and questions from visitors. We do not know when this event will happen, how big it will be, or how long it will stay. Each summer, we are all waiting for “The hatch”.
The hatch is not a budget horror film, but rather what we call the emergence of thousands, even millions, of mayflies. Actually, several species of mayflies hatch all along the river at different times. But, when conditions are just right, swarms of mayflies appear without warning, overnight. They disrupt our peaceful summer evenings and leave us with a big mess in the morning. This unexpected event can be the bane of outdoor weddings and events. The swarms can even cause traffic problems. But mayfly hatches are important events, and their growing size is a sign of the river’s improving health. It can be both thrilling and frustrating to witness a large mayfly hatch over the Susquehanna.

The day after a hatch, thousands of dead mayflies lie piled around lamp posts and streetlights. They cover sidewalks and parking lots like snow. Out-of-town visitors encountering them for the first time usually have one question: what are those things? 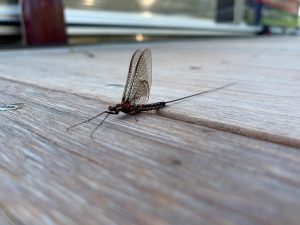 Mayflies are aquatic insects that belong to the order Ephemeroptera, which means “short-lived”. They are also known as shadflies, fishflies, or up-winged flies. They are ancient insects that have lived on this planet for over 350 million years. They even lived while dinosaurs were here. There are more than 600 species of mayfly in the United States and over 3,000 worldwide. In Pennsylvania, there are at least 175 different species. Mayflies can vary in size, but they typically grow anywhere from 0.25 to 1.1 inches. The largest species of mayfly in the world is the Tisza Mayfly, found in Eastern Europe. It measures 4.7 inches from head to tail. The Tisza Mayfly hatch has become a tourist attraction known as the “Blooming of the Tisza.”
Mayflies spend most of their lives underwater. They begin as eggs and then hatch into nymphs (the first hatch of a mayfly’s life). As a nymph, a mayfly can live underwater anywhere from 2 weeks to 2 years, depending on the species. When the nymphs finish growing, they make their way to the surface and the hatch begins.

Mayflies emerge at different times, depending on the species, weather, and water conditions. They could “hatch” from their nymph form in May… but it also happens in June, July, and even August. That’s because different mayflies, caddisflies, stoneflies, and duns hatch from April through September. Some species hatch several times a year if the conditions are right. 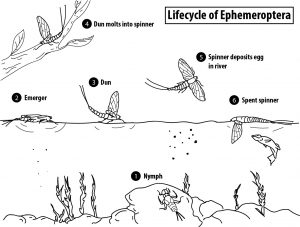 First, the nymphs emerge from the water by swimming to the surface or climbing out on rocks to the banks. Then, they shed their husk and become duns (subimagos). The duns float along the surface until their wings are dry enough to take flight. The duns fly into the bushes and trees along the riverbank, where they shed their skin and become complete adults, also known as spinners.
Many species of mayflies synchronize their emergence, increasing the likelihood of reproduction. Male mayflies spin and dance to attract a mate, usually beginning around dusk. The females join the dance and the mayflies swarm and mate in the air. The female then immediately lays her eggs in the water. After laying her eggs, she dies. In some species of mayfly, the eggs stay in the female’s body, floating with her to her underwater grave. Adult mayflies do not have mouths, since they do not eat during their few fleeting hours of adulthood

Hatches Along the Susquehanna

These large hatches are a good sign for the region. Mayflies and other bugs are so small that even small amounts of pollution can kill them. Mayflies are particularly sensitive. Even modest levels of water pollution can kill up to 80 percent of their eggs, so they are usually only found at minimally-polluted sites. Because they live in a wide variety of habitats and are so sensitive to pollution, mayflies are valuable water quality indicators.
As water quality improves, hatches will get bigger and more species of mayflies may also appear. Whiteflies hatch in large numbers in this region. Hexagenia bilineata, large dark mayflies whose dense swarms show up on weather radars, also hatch along the Susquehanna River.
Mayflies are common fish food because so many adults emerge from the stream at the same time. Fly fishers often use flies made to look like mayflies. During hatching season, fishermen and fisherwomen everywhere use artfully made flies that resemble these glorious insects. Mayflies are an extremely popular entrée for several types of fish, including trout. The nymphs are also a source of food for fish, birds, frogs, and other predatory insects.

One hatch here along this part of the Susquehanna River made international news in 2015. A swarm took to the lights on the Veteran’s Memorial Bridge on June 13, 2015, and created blizzard-like conditions. Several inches of dead mayflies piled up on the bridge, causing slick driving conditions and three motorcycle crashes. The bridge closed, and snowplows were even used in the cleanup. The bridge closed again briefly the next night due to another swarm.

Now, Columbia Borough turns off the bridge’s lights for a few weeks every summer to avoid another possible mayfly calamity. The dark bridge usually captures the interest of people unfamiliar with our river who wonder why the lights are out.
Those of us who love and respect the river, who work hard to make it a clean and healthy body of water, know that these mayfly swarms are a welcome sign that the river is improving. Like the mayfly’s lifespan, the hatch is a fleeting time full of stories, photos, and a little bit of mayhem. As the weather starts to warm up and we spend our days outside along the river, we all start to look and wait for our upcoming annual event: the hatch.

June 8, 2022: Follow the Hatch—Aquatic Insects in Lancaster County’s Streams and Rivers  6:00 PM – 7:30 PM at Columbia Crossing. Join Dr. John Jackson of Stroud Water Research Center and Keith Williams of Lancaster Conservancy for a deep dive into the world of mayflies, stoneflies, caddisflies and the many other tiny creatures that call our streams home.

Miller, Adam. “Massive Swarms of Bugs-A Sign of a River on the Mend.” Alliance for the Chesapeake Bay.