Near the turn of the 19th century, water-based transportation was essential to civilization. With no automobiles or trains, land transportation was limited to horse and foot. Across the new United States, surveyors and map makers were seeking to find connective water routes – like the Lewis & Clark Expedition that started in 1803. The Susquehanna’s connection to the Chesapeake Bay made it an obvious target for commerce.

The Lower Susquehanna was swift and rocky. The Susquehanna was only navigable downriver to Columbia, even during spring freshets. There wheat, beef, coal, lumber, and other goods were unloaded and carried via wagon to Philadelphia. Downriver from Columbia, craggy metamorphic ridges rise up between 200 and 500 feet above the water in what is called the Susquehanna Gorge. At the bottom of the gorge, the river was dominated by huge rocks protruding above the waterline. This is no small obstable to overcome as the gorge runs from Turkey Hill to Port Deposit, a distance of nearly thirty miles.

In 1801, Pennsylvania Governor Thomas McKean appointed Latrobe surveyor and assistant to his uncle, Frederick Antes, as authorized by a 1799 state statute providing for navigation improvements to the Lower Susquehanna River south of Columbia. Latrobe and Antes represented Pennsylvania in a joint venture with the Susquehanna Canal Company, a Maryland entity building a canal from the Pennsylvania border to tidewater. 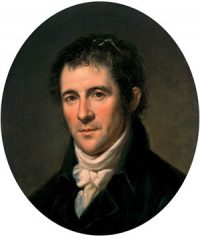 With his uncle’s death in September 1801, Latrobe assumed control of the Pennsylvania portion of the project, working with his Maryland partners. Latrobe surveyed the river in October-November 1801 with the help of two assistant surveyors, chainbearers, axemen and canoemen. He completed his map over the winter, including a proposed new route for navigating the rocky river. Latrobe presented his work to the governor in Lancaster (then Pennsylvania’s capital) in March 1802 and lobbied the legislature for project funding. His efforts were successful, and the navigation improvements were completed soon after.

Latrobe’s Susquehanna survey map represents a rare profile of the physical features of a region just beginning to feel the impact of agricultural and commercial development. This landscape has changed drastically since Latrobe’s time, with 60 percent of the river below Columbia now submerged by reservoirs from three 20th century dams. Latrobe’s original 18-foot long survey of the Susquehanna was before Congress for consideration of internal improvements when it was destroyed during the Capitol’s burning by the British in 1814. His personal copy of the 1801 survey, shown below, now resides in the collections of the Maryland Historical Society. A full-size reproduction of this survey copy is on public display at the waterfront pavilion of Susquehanna NHA’s Zimmerman Center for Heritage.

The river rapids shown by Latrobe reveal that the river’s steepest gradient is near its mouth. Such conditions exist in most of the great African rivers, but they are not found in any other river on our Atlantic seaboard. These circumstances made upstream travel almost impossible. Even downstream travel was made only by arks and rafts which were usually dismantled at their destination and sold as lumber. Latrobe sought a route to take boats northbound but there were many challenges.

Most narrow part of the southern half of the Susquehanna River is at McCall’s Ferry, modern day York Furnace. In Latrobe’s survey it was listed as 16 perches, or 264 feet wide. In 1815, when a bridge was built across the river there it was 360 feet long. After the Holtwood Dam was constructed, the river was widened by the backed-up water, but the spot is still less than ¼ mile wide or 1320 feet. Near this narrow spot in the river were also many deeps.

At a place known as The Neck, Latrobe dropped a 180-foot line with a lead weight, and it didn’t hit the bottom. The weight also didn’t hit bottom along the eastern shore at McCall’s Ferry. During the construction of the Hotlwood Dam (1909), Conowingo Dam (1925), and Safe Harbor Dam (1930), many deep gashes were found in the riverbed. These underwater canyons descend below the surface as much as 200 feet and stretch up to two miles in length. Latrobe was likely puzzled by his observation of such deep water since the levels elsewhere were very low. Latrobe was able to walk across the river south of Turkey Hill. He wrote “I walked dry shod across the rocks from Savers bottom to the channel on the Eastern side, which was then about 100 feet wide.” In the end, Latrobe laid a channel to allow southbound traffic in all seasons. Even with blasting obstructions and clearing a narrow channel, the Susquehanna was still very hazardous.

Use the slider image above to compare Latrobe’s map to modern Google Earth. Latrobe’s ability to capture the shape and scale of the river with accuracy is impressive. Although many of the river’s islands shown by Latrobe were submerged because of the construction of the hydroelectric dams, some of the islands and their names still endure. South of the Norman Wood Bridge is the Bear Islands. Latrobe described their features as “They are high Rocky masses of great extent, covered chiefly with pines” that “rose from 20 to 30 feet above the water.” Just north of the Pequea Creek outfall is Weise Island. On Latrobe’s Map this is labeled Stoner’s Island and has two small structures on it that may have been part of the local ferry operation. Mud Island near Columbia remains the same while Reed Island, south of Pequea, has shrunk dramatically. Many of the islands are now under the river’s flow which has skewed our vision of the river’s natural state.

The sheer cliffs and peaks along the riverfront also remain. These are helpful to orient the 1802 map with modern maps or other historic maps. Latrobe identified:

Although the goal of the survey was to increase navigability of the Lower Susquehanna to the tidewater some of the notes and features expand our understanding of early American life. Latrobe identifies over two dozen riverfront homesteads and farms. There are six ferries listed as well as three sawmills. There’s also a slate quarry near Peach Bottom and a fishery north of Pequea Creek.  One enduring structure is “Col. Tritt’s” home, now the Zimmerman Center for Heritage, which still stands as shown on Latrobe’s map, just below “Tritt’s Islands.” Latrobe also made pencil sketches and watercolors along his journey, capturing a scenic natural area just beginning to develop as a corridor of culture and commerce.

Latrobe’s survey resulted in the blasting of rock to create a 40-foot-wide channel but it would be thirty years until canal companies would make the river easily navigable. The Susquehanna & Tidewater Canal finally carried cargo on the west side of the river between Havre de Grace, Maryland and Wrightsville, Pennsylvania in 1840. Boats were then towed along the Columbia-Wrightsville Bridge and entered the Pennsylvania Main Line Canal which traveled up the east side of the river to north of Harrisburg. The advancement of land transportation via railroads would eventually end the age of canals and with it the quest to make the Susquehanna navigable.

The Latrobe map was pulled from the archives and used by Pennsylvania Water & Power Company as it prepared for construction of the Holtwood Dam in 1909. The map served as a guide to subdue the river just as it had been 100 years earlier. Today, the Latrobe map shows us the power of people to affect the environment, as well as the power of nature to resist those changes. The Susquehanna Gorge has retained its mysterious deeps, its sheer cliffs, and its rocky bottom despite two centuries of human manipulation.

View a full size copy of the Latrobe map at the Zimmerman Center for Heritage Riverfront Pavilion Pavilion. Dive into a digital version here.

View the Susquehanna! Go to the Overlooks noted on Latrobe’s map and see what the river looks like today. Can you imagine where all the rocks, rapids, and homesteads were 200 years ago?