RiverRoots: History of the Shifter

River Roots: History of the Shifter

What is a shifter, exactly? In the Susquehanna National Heritage Area, it’s a railroad locomotive and a sandwich! But, it’s not just any sandwich. It’s a sandwich with local roots, almost exclusively served along the Susquehanna River in Columbia and Marietta.

Local accounts trace the origins of this sandwich back to the 1910s in Columbia. In that era, the railroad yard by the river was bustling with activity. An army of skilled and unskilled workers labored in the switching yard near the roundhouse. A roundhouse is large circular or semicircular building around turntabled used for servicing locomotives. Mechanics maintained locomotives, workers rushed to clean up after derailments, and conductors used “shifters” to move railroad cars from drop-off to pick-up points.

A “shifter” (also known as a “switcher”) is a small railroad locomotive used for maneuvering railroad cars inside a rail yard. Shifters are not intended for moving trains over long distances. They are for assembling train cars for another locomotive to take over. The typical shifter is low-powered but has a high starting tractive force for getting heavy cars rolling quickly. Switchers produce high torque but move slowly and have small diameter driving wheels. Shifters are to trains are what tugboats are to boats.

Switching was hard work. Shifter engines wore out quickly from constant collisions with cars and frequent starts and stops. Switcher locomotives needed water and coal or wood to operate. Some had a tank for water and others had a car called a “tender” that carried their fuel.

The hustle and bustle of downtown Columbia centered around the river and railroad industry. The low vibrations of trains riding the rails, the loud train whistles, and the smell of heat filled the air. Working in the rail yard was hard work, and the men worked up a mean appetite. Columbia’s restaurants, bars, and hotels all created hearty meals that workers could dig into as soon as they clocked out. One of those meals was the monster of a ham and cheese sandwich that we now call the Shifter.

There are a few stories in Columbia about who started serving the Shifter sandwich first. One story is that it was first started by the Lutz family at their hotel on Front Street in the 1930s. The Olena family also claims that they served Shifters in Columbia Cafe in the 1910s. Later, the Rising Sun Hotel claimed it, since they included the sandwich with an overnight stay. The Rising Sun may have been the first one to put the ingredients in the order we still use today. Although we can’t sort out all the gossip about its origin, we are going to share here the story from descendants of the Columbia Café family.

Feeding railroad workers was big business in Columbia. Railroad bosses often ordered a gallon of coffee, a gallon of soup, and a pile of sandwiches at three separate hotels. Columbia hotels were the top choice for lodging by railroad workers because the owners often included meals in the price. By the 1930s, many local eateries recreated and offered the Shifter to Columbia’s railroad workers. The Rising Sun Hotel and the Lutz/Lower Hotel both served up Shifter-style sandwiches to their guests. Both hotels wrapped the sandwiches to keep the food clean when workers ate them with one hand as they worked. 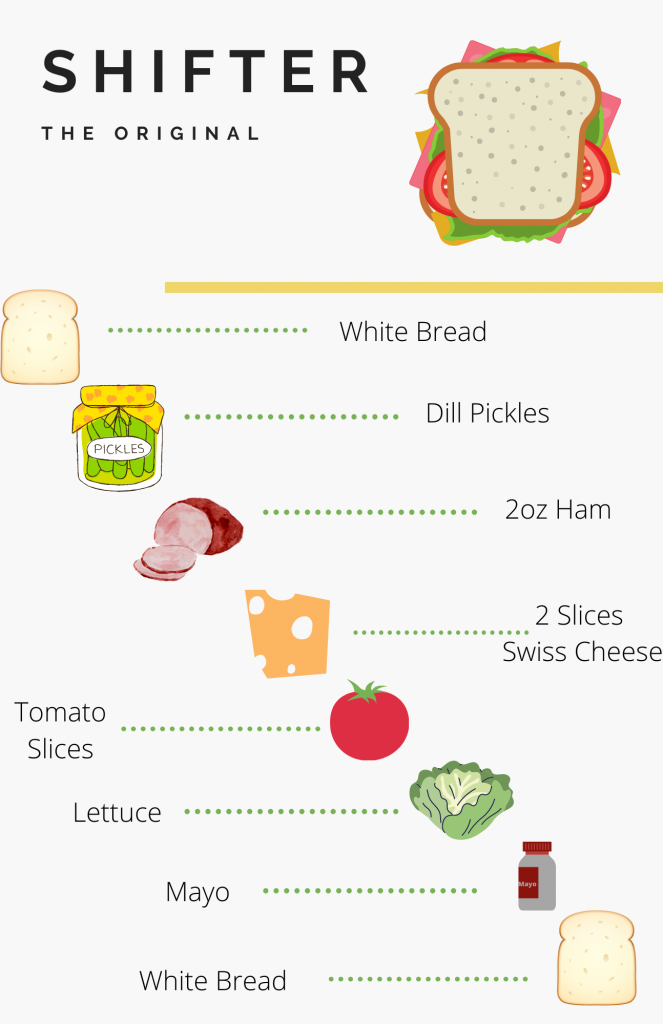 The basic Shifter wasn’t exactly nutritious, so restaurants added lettuce, tomatoes, and pickles. Local hotels often served Shifters at company-provided lunches for shift workers, so the name stuck around even after the railroads left Columbia.

The modern Shifter has a very specific construction. It starts with a slice of white bread, then a layer of mayonnaise, lettuce, and tomato slices. Next come two slices of Swiss cheese, two ounces of ham and dill pickles, and then another slice of white bread. If your sandwich isn’t constructed in that order, it is not a Shifter. Some people accept a few variations, like turkey instead of ham or sweet pickles instead of dill. Still, the Shifter remains mostly unchanged over the 100 years since it became a local favorite! 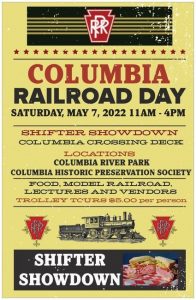 Columbia Railroad Day is Saturday, May 7, 2022, from 11 am – 4 pm at the Columbia River Park! This year, it’s all about the Pennsylvania Railroad’s history in Columbia. Enjoy “HO” and “O” gauge model trains at the Columbia Historic Preservation Society. Ride a “speeder” or small gas-powered unit on the spur line that runs through Columbia. Take a historic tour on a vintage trolley or attend lectures at Columbia Crossing. Enjoy the Shifter Showdown, a variety of vendors, and food in the River Park.

Want to try Columbia, Pa’s most famous fare? Stop for lunch during your next visit and order an authentic shifter from Rose’s Deli & More or Hinkle’s Restaurant!

Fulton, A. “The Shifter”… plus a showdown and a slice of history.

The Railroad in Pennsylvania Chapter Two: The Pennsylvania Railroad: “Standard of the World”. Explorepahistory.com – stories from PA history.