The pawpaw is a native fruit with deep roots and a big history that most people have never heard of. It is the largest edible fruit native to the United States. The fruit is indigenous to 26 states from northern Florida to Maine and west to Nebraska. The Susquehanna NHA is abundant with pawpaws if you know where to look. Those who know what they are consider pawpaws a delicacy.

What’s a Pawpaw?
The pawpaw belongs to the “custard apple” family of tropical fruits called Annonaceae. It is the largest family of the magnolia order (Magnoliales) of flowering plants. There are over 2,000 species in the family including trees, shrubs, and woody climbers. The majority of Annonaceae are tropical. A few species, like the pawpaw, extend into temperate regions. 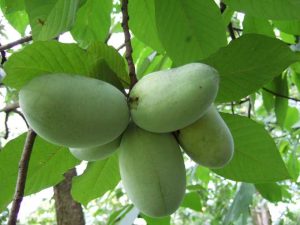 Pawpaws look like mangos and taste like bananas, a trait of their tropical family tree. (Get it?) Yet, they are not tropical. The pawpaw grows best in areas with hot summers and cold winters. They fruit in late August to early October.

Pawpaw Trees (Asimina Triloba)
Pawpaw’s scientific name is Asimina, which comes from the Algonquin word for the tree: assimin. The trees are most common near riverbanks and in the understory of the rich eastern US forests. Pawpaws are understory trees, which means they can still thrive under the canopy of a taller tree. These fruit trees like humid aid moist ground, which is why they grow in fertile soil along waterways and hillsides. Pawpaws protect themselves against blight and mold if planted in areas with good drainage and airflow. There are both male and female trees. However, the pawpaw tree is clonal and spreads by root, so they grow in patches. 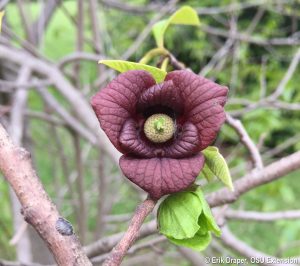 In the springtime, the tree gets beautiful dark maroon flowers. Once pollinated those flowers transform into mango-sized fruits by September. The pawpaw leaves provide a tropical look that is like its Annonaceae cousins. Each leaf can be up to 12 inches long. When torn, pawpaw tree leaves have an unpleasant odor. The unpleasant-smelling leaves, twigs, and bark of pawpaws contain natural insecticides called acetogenins. They defend the tree from hungry woodland animals like rabbits, deer, and even insects. The fruit is a great meal for opossums, foxes, squirrels, raccoons, and birds.

Harvesting pawpaws at home is going to take some dedication and patience. Pawpaw trees grown from seeds can start to produce fruits in four to eight years. If you plant grafted transplants, then you might have to wait three or more years to harvest their fruits. The best pawpaw varieties are Shenandoah, Allegheny, Susquehanna, and PA Golden.

Pawpaw Fruit
The pawpaw has a creamy, custard-like flesh with a tropical flavor. It is often described as a combination of mango, pineapple, and banana. The pawpaw is sometimes called the Appalachia Banana, Custard Apple, or Poor Man’s Banana. You can ripen the fruit at room temperature. They are ready to eat once their skin has speckled black spots and they are soft to the touch. The easiest way to eat one is to cut the ripe fruit in half, remove the seeds, and squeeze the flesh from the skin. Do not eat the skin or seeds, as they contain toxins.

When fully ripe, the fruit’s flesh presents as yellow-orange to white in color. Its consistency is comparable to soft-serve ice cream or mashed potatoes. You can eat pawpaws raw or use them in chilled desserts such as smoothies and ice cream. They also bring flavor to pudding, preserves, butter, and jams. They can be creatively used in cocktails, coffee, and even beer.

Ripe pawpaw fruits have a very short shelf life of only 3-5 days. This makes pawpaws an unlikely product in most grocery stores. Retail prices for fresh pawpaws at farmers’ markets and upscale grocery stores range from $3 to $8 per pound. The prices are even higher when bought online. Frozen pawpaw pulp can sell for $6 per pound or more.

Pawpaw History
Fossil records show that the papaw’s forebears spread to North America millions of years before humans. Scientists hypothesize that as the planet warmed, now-extinct mammals such as mastodons and giant ground sloths ate pawpaws whole and dropped seeds as they migrated north.

Native Americans used the pawpaw as food and medicine for centuries. According to historians at Colonial Williamsburg, Native Americans ate both wild and cultivated pawpaws. The fruits, which usually ripen in September, were a seasonal staple in Native Americans’ diets. They are them straight from the tree or dried into them fruit leather to eat in the winter. In 1541, Hernando de Soto noted that Indians in the Mississippi Valley grew and ate the Pawpaw fruit. 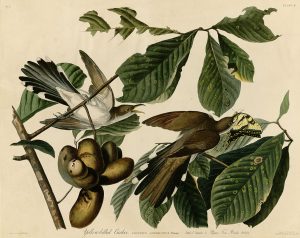 Though often forgotten today, pawpaws often left their mark on American culture. European settlers named towns, creeks, and islands after the pawpaw. Thomas Jefferson and George Washington both had pawpaws growing in their gardens. Daniel Boone and Mark Twain were also pawpaw fans. Lewis and Clark documented in their journal that pawpaws and nuts their expedition during a rough patch as they ventured to the Pacific Northwest in 1810. In 1826, James Audubon painted a pair of cuckoo birds in a pawpaw tree. Soldiers from both the North and South subsisted on pawpaws during the Civil War. Pawpaws also helped to supplement the diets of enslaved people. Freedom seekers ate pawpaw as they made their way along the Underground Railroad.

Traditional Appalachian Folk song, “Way Down Yonder in the Pawpaw Patch.” Listen to it here.

In the Susquehanna National Heritage Area, the Horn Farm Center celebrates the pawpaw every year. This year, York County’s 18th Annual Pawpaw Festival is on September 24th & 25th! The Horn Farm Center has a pawpaw orchard on site. Dick Bono started the grove in 2012 and he still maintains it. The grove now has 48 trees and over 20 varieties of pawpaws. At the event, you’ll find different variety of pawpaws available for you to taste and buy. You can even take home a tree to start your own grove.

Looking to forage for your own pawpaws?

You will find them along a variety of recreational trails. Check out the Falmouth Forest Garden along the NW Lancaster County River Trail. The Lancaster Conservancy planted this five-acre section of the Conoy Wetlands Nature Preserve to showcase native edible foliage like pawpaws. Further south, you’ll find pawpaws along the Turkey Hill Overlook Trail. This moderate hike is worth the view when you arrive at the scenic vista overlooking a National Audubon Birding Area. Pluck pawpaw on the way to the top. When picking pawpaw, a gentle tug should remove it from the tree. If it’s not coming loose, it’s not ripe. The fruit should feel like a ripe peach when gently squeezed. Once you’ve found a ready one, peel the skin and dig in – just remember to spit out the seeds!