As we celebrate the re-opening of the Martic Forge Trestle bridge, we look back at how the Enola Low Grade Rail Line came to exist and how it rocked the landscape. This engineering marvel was the dream of Pennsylvania Railroad (PRR) President Alexander J. Cassatt. At the turn of the twentieth century, the PRR struggled to keep up with passenger and freight demands. He planned a new line to stretch from Trenton, New Jersey to Enola, Pennsylvania. Lancaster County sat at a crucial location along the route and the proposed line would avoid congested passenger service areas and carve across rural land in the county. The goal was a flat, straight corridor west to the Susquehanna and then north along its shore. The PRR deemed the new line as the Atglen & Susquehanna Branch but many referred to it as the A&S or the Enola Low Grade. 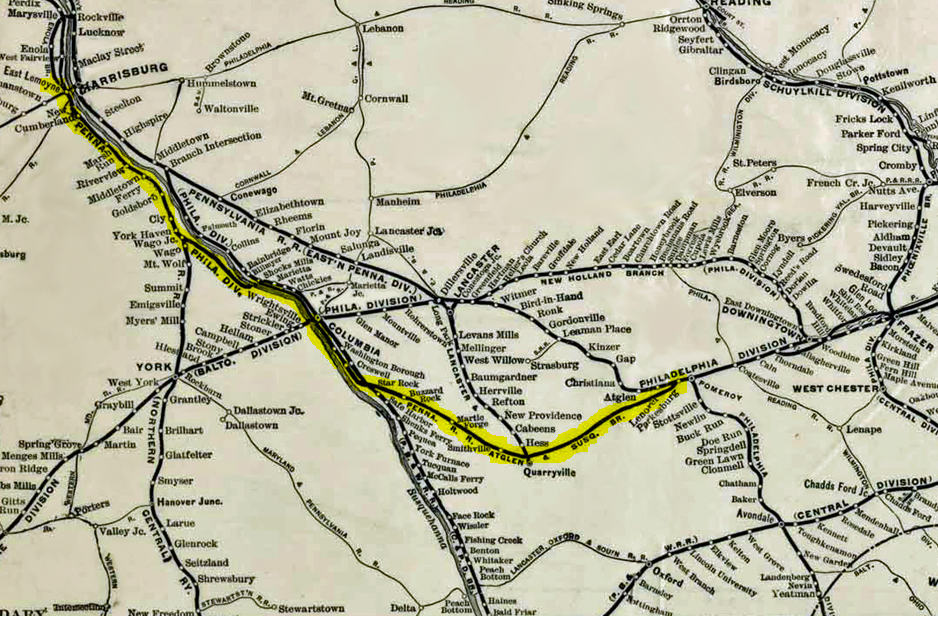 The goal was to keep the grade below one percent and no curve sharper than two degrees. The plan seemed simple until you consider the typography of the land. But the nearly 50-year-old railroad lines in Lancaster County had issues that could not have been easily fixed. For example, the railroad near Gap has significant speed-restricting curves. Steep grades outside of Mountville and Elizabethtown required helper engines. In Lancaster City, the bridge over the Conestoga River had only two tracks despite four lines running to it on both sites. The Atglen & Susquehanna Branch would stretch across southern Lancaster County and then north along the Susquehanna River to the Enola railroad yard. In the end, the line would be as long as the Panama Canal and cost nearly 20 million dollars and over 200 lives.

Rather than tell the story of constructing the Atglen & Susquehanna Branch, we will move through the line from Atglen to Enola discovering the most significant parts of the project. At Atglen, the new rail line came off the existing mainline at an existing curve. The first challenge was constructing a massive bridge over Noble Road and the East Branch of the Octorara Creek near Atglen. This 60-foot tall stone arch bridge stands at the line dividing Lancaster and Chester Counties. Millions of tons of earth were required to ascend to the bridge height on the easy, one-percent grade demanded by the Pennsylvania Railroad. The rail climbed for 5 miles westward from Atglen to the Low Grade’s highest point at Mars Hill Summit in Bart Township.

It is important to note that the PRR built this line for steam engines, which require water. So beyond a railroad track, the PRR built a water system alongside the A&S. In 1903, the Octorara Water Company formed from seven smaller, municipal water companies. Its only customer was the Pennsylvania Railroad. The railroad main line had four tracks that carried passenger and freight service. The A&S had two tracks for only freight traffic. Together, these tracks used more than 2 million gallons per day from the Octorara Water Company. Remanents from the adjacent water system can still be found today.

No section of the Atglen & Susquehanna Branch showed PRR’s commitment to modifying the landscape than the stretch from Quarryville west through Providence Township. In these seven miles, the McManus Construction Company moved 1.3 million cubic yards of rock and earth to create seven cuts, as deep as ninety feet. 1.3 million cubic yards is an unimaginable amount of earth. It is equivalent to over 81,000 full dump trucks. If they leveled it to 3 feet high and 3 feet wide the dirt and soil removed would stretch east to west across Pennsylvania, twice. The digging took nearly a year to complete. The section also required twelve new road bridges and crossings over a dozen streams.

Compressed air drills, sunk pilot holes for dynamite blasting, and steam shovels removed debris in layers. It was piled directly next to the railway creating massive berms. A crew of nearly 300 men followed moving the debris out of the way. It is difficult to find information on the workers that took on these dangerous jobs. We know some were local whites and Blacks, primarily from obituaries and accident reports in the newspapers. Many immigrants also took jobs for the railroad. Newspaper reports mention Italians, Syrians, Germans, and Turks. One local worker remembered that they were taken directly from incoming boats to the job sites. Italian masons did much of the stonework on the two dozen bridges over and under the rails.

At the Martic Forge, the Pequea Creek sits in a deep ravine with impressive stone cliffs on either side. The PRR sought to span the 635 feet between the stone cliffs with a steel trestle bridge. The bridge had to straddle the creek as well as an existing trolley line (now River Road). In the end, the double-track bridge soared nearly 150 feet over the creek.

Just 3.5 miles passed the Marticville Trestle Bridge was another formidable gap at Safe Harbor. Safe Harbor is located at the confluence of the Conestoga and Susquehanna Rivers. The sheer cliffs along the river posed another arduous obstacle. Unlike the Marticville span, the PRR planned to span the gap below the ridgeline. Thousands of pounds of rock needed to be dynamited off the cliffs to create the wide and flat grade. The contractor H.S. Kerbaugh of Philadelphia was hired for the tremendous project. Kerbaugh had completed numerous projects for the Pennsylvania Railroad including the Rockville Bridge at Marysville in 1900. His job was to create two separate freight roads at a location where one barely fit.

Nearly 3,000 men worked continuously with drills and explosives to the rock and loam in their way. They drilled hundreds of pilot holes, after which, they hand-passed dynamite up the cliffs. All the dynamite would be placed in the pilot holes and detonated at once. In just one month in 1905, they used 225 tons of explosives that removed over 240,000 cubic yards of material. This was, of course, dangerous work. The newspaper reported deaths regularly with headlines like “Awful Fate of Six Men,” “Four Men Torn to Shreds at Highville,” and “Two Men Burned to Death at Safe Harbor.” Columbian and avid railroad historian, Fred Abenschein, once explained “If you were a WASP, you got your name mentioned when you died. When others died, they were just numbers.”

The Safe Harbor Trestle Bridge ended up being over 1,500 feet long and over 150 feet above the water. Over the river was a 300′ Pratt truss. Nine additional spans sat at the northern end with seventeen spans on the southern approach. Unexpectedly it also ended up being a dual bridge construction project. The Columbia Port Deposit Bridge over the Conestoga river at this location was washed away just as as trestle project began. Rather than rebuild it at the exact location, the PRR designed a unique two-line, two-level steel bridge. The Columbia & Port Deposit Line was carried over the river, while the Safe Harbor Trestle ran parallel nearly 100 feet higher.

All that rock and loam debris had to fall somewhere and most ended up in the river. This affect wildlife as well as local residents. A court case from 1913 was found settling a dispute between some local residents and Kerbaugh Construction. The residents own some islands on the Susquehanna River near Safe Harbor totally 136 acres. About 80 acres of the islands were used for agriculture. The owners claimed all the blasting filled the river channel and made it impossible to get to their property. In the end, they owners were awarded about $8,000 for damages. There were no requirements made to clean up or clear the rock from the channel.

Another massive landscape project happened north of Columbia near Chickies Rock. The rail line followed the shoreline of the river which hugged the massive cliffs. Although the land was flat, it had a curved profile along the cliffs. The PRR was uncompromising with its demands so tons of fill was brought in to build up a straight track through the river. In doing so, they cut off a 3/4 mile-long section of the river. The low-lying swamp that divided the PRR’s old railway with the new one was deemed Kerbaugh’s Lake. Kerbaugh was the primary contractor between Safe Harbor and York Haven. About thirty years later in 1936, the rail line at the lake was significantly damaged by flooding. After repairs, a plan to fill the lake began. By the end of World War II, the lake was gone.

The Shock’s Mill Bridge was one of the first construction projects as part of the Atglen & Susquehanna Branch in December 1902. By May of 1903, the construction crews were building one pier per week. About eighteen months later it was complete with 27 piers, and 28 arches, with the railway sitting 60 feet above the water. The intensity with which the project moved did have a cost; there were numerous injuries from premature explosions and at least one drowning. On the York side, the Northern Central Railroad had recently expanded tracks from Wago Junction to Enola Yard so PRR work in that region was nearly complete. Things were different across the river. The approach to the bridge from the Lancaster side needed to be more than a mile long. Fill had to be shipped in to raise the railroad tracks over 36 feet in height. The Vesta iron furnace in Marietta supplied cinders. The Lancaster approach cost over $200,000 more than the bridge cost.

After three long years, the A&S was opened on July 27, 1906. A dedication ceremony in the “the Deep Cut” near Quarryville was the location where about a hundred people watched local businessman George Hensel hammer the final spike. The Pennsylvania Railroad had realized their dream. They create a freight super highway across central Pennsylvania. The contribution of the Low Grade line to the growth of the Pennsylvania Railroad is incalculable. In 1938 the PRR transitions the line from steam to electric using power from the Safe Harbor Hydroelectric Dam. In 1941, the route carried an average of 2,220 railcars in each direction every day. For nearly 80 years, the rail line served the fuel and food demands of the eastern seaboard. The the last train came through the line in 1989.

In the last 30 years, an amazing regional effort has reimagined the Enola Low Grade Line as a rail trail. Today, October 27, 2022, with the opening of the Martic Forge Trestle Bridge, there will be nineteen completed miles of trails. As you walk or ride between the Turkey Hill Trailhead and the town of Quarryville, take the time to imagine the back-breaking labor and undaunting vision that it took to create the corridor.

Explore the Enola Low Grade Trail and the NW River Trail! Use the SNHA trail guide digitally or grab a paper version at Columbia Crossing River Trails Center. You can see all our Maps & Guides online. While you are on the trail, look for heritage panels along the way.

Visit the Railroad Museum of Pennsylvania in Lancaster County. They have a collection of over 100 locomotives on display plus the history of railroad development in the state.

Brubaker, Jack. “Workin’ on the Railroad/ A century ago, a monumental task began along the Susquehanna River.” LancasterOnline. October 20, 2004.