This month SNHA is celebrating natural heritage by exploring the lower Susquehanna River’s connections to a network of key stopover sites along the Atlantic Flyway. The beneficial effects of the Susquehanna River’s connection to the flyway have played an important role in creating rich biodiversity and potentially shaped the foundations of early settlement and local culture.

The Conejohela Flats are part of a series of locations on the lower Susquehanna that offer respite for migratory birds. Some other sites include the Muddy Run Reservoir, Conowingo Reservoir, and the Susquehanna River at Safe Harbor. Each location’s unique attributes aid the birds during their stop along the flyway. These stopover sites continually draw large volumes and varieties of migrating birds through the Susquehanna River corridor biannually. 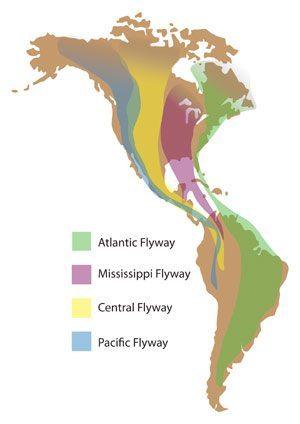 According to Audubon, about 500+ bird species use the Atlantic Flyway. Millions of songbirds, shorebirds, birds of prey, and waterfowl follow the flyway every fall and spring. The flyway is not limited to birds alone, the route is also used by butterflies, as well as some species of bats and dragonflies.

Migration can be triggered by a combination of changes in day length, temperatures, food supplies, and genetic predisposition. Spring migration occurs in a mass movement within the flyway.  It takes place over a shorter period than the fall migration since birds are anxious to reach their breeding grounds. March through May, you can see flocks making their way north across the United States. The fall migration season is a drawn-out affair. The travelers begin heading south starting in August and lasting through October, but some waterfowl can procrastinate until December depending on weather conditions.

Migrating birds use a variety of methods to navigate the flyway. Topographical cues, such as coastlines, river courses, and mountain ranges, help to guide the flight. Typically, species in the Atlantic Flyway migrate farther, making stopover sites critical to their journey. Migrating birds rely on these sites to breed, feed or rest, particularly along the east coast of the United States. The Chesapeake Bay and Susquehanna River form the single largest watershed on the East Coast and provide a variety of important stopover sites. Each site plays a critical role in migratory birds’ survival.

The Conejohela Flats are a combination of low-lying brushy islands and adjacent mud flats on the Susquehanna River in Lancaster County about three miles south of Columbia and Wrightsville, located just offshore from Washington Boro within the Susquehanna NHA. The flats are highly important to migratory shorebirds, providing essential habitat and resources.

The Conejohela Flats stopover site is a Pennsylvania Game Commission designated propagation area for numerous wetland species and waterfowl. Migrating birds use the river for feeding and the flats for resting. The flats are one of only a handful of dependable sites in Pennsylvania for large numbers and variety of shorebirds. A total of 38 shorebird species has been recorded at this site. The Conejohela Flats hosts up to 17,000+/- migratory shorebirds during migration. 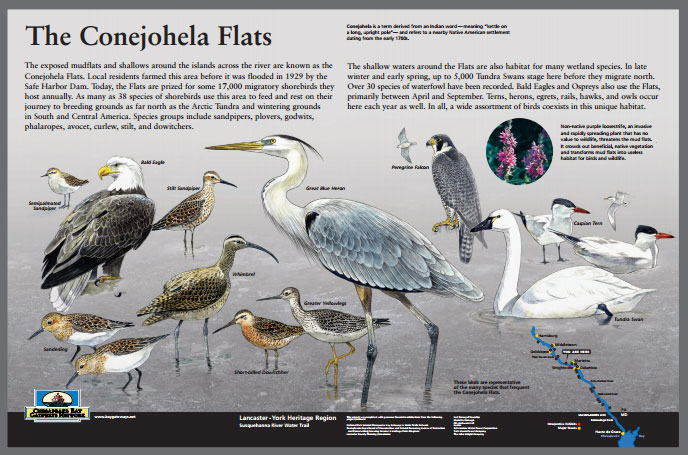 The Conejohela Flats have been named an Audubon Important Bird Area. Important Bird Areas are distinct areas that provide essential habitat for one or more species of birds in breeding, wintering, or migration. The Conejohela Flats are also listed on the Natural Heritage Area inventory. Natural Heritage Areas are locations of rare, threatened, and endangered species and the highest quality natural areas in Pennsylvania. Information is gathered at these areas with the purpose of providing current, reliable conservation information on biological diversity, protected lands, streams, and other natural resources for planning purposes.

The Conejohela Flats’ connection to the flyway reminds us that the migrating birds visiting these sites connect the lower Susquehanna with the rest of the world, and that we have a shared responsibility to work for their conservation. The Atlantic Flyway is home to a wide variety of ecosystems all reliant on each other.

The Atlantic is the most densely populated of the four flyways and many waterfowl habitats in this region are threatened by development and urban sprawl. Many stopover sites face hardships despite conservation efforts.

The Conejohela Flats are alluvial islands that develop from the forces of erosion and deposition and the building up of large amounts of sediment which alters their shape and size. Major floods from severe weather events can dramatically change islands. Ice during the winter devastatingly carves out large chunks of land and soil altering the landscape. The dredging of river channels, construction of dams, pollution and erosion of soil caused by poor agricultural practices, intensive logging of the watershed, and acid drainage from coal mining has harmed natural areas such as the Conejohela Flats and on a greater scale the health of the Susquehanna River and the Chesapeake Bay.

Efforts have been made in recent years to restore the health of the river and Bay, but much work remains to be done. The operators of Safe Harbor Dam are required by their Federal Energy Regulatory Commission license agreement to not raise the water level of Lake Clarke above a certain set amount so that a percentage of mud flats are exposed from April through October during the shorebird migration period.

One of the great things about taking a closer look at our connection to the flyway is that it leads us to think about our own heritage, and how it fits in with larger patterns in history. The term Conejohela is derived from a Native American word meaning “kettle on a long, upright pole.” The Susquehannock were the last known native group to live in this area along the river near present-day Washington Boro. The many islands and rocks were used for hunting and fishing. Dugout canoes aided in hunting and trade on the river.

The geographic location and natural resources made the Susquehanna an ideal location for early settlement. Atlantic Flyway stopover sites like the Conejohela Flats provided greater species diversity, on the river and along its shores. The Atlantic Flyway’s biannual supply of migrating waterfowl to the lower Susquehanna, made it a popular hunting area for Native Americans and European settlers.

The Susquehanna River is not just a major migratory corridor for ducks and geese, it is among the places where modern waterfowl hunting began. Waterfowl have been hunted for food, down, and feathers since prehistoric times. A more modern version of duck hunting began on the east coast during the 1600’s, as European settlers began to arrive. In England, hunting was generally the pursuit of game on land with hounds. Settlers brought primitive firearms and hunted waterfowl with great zeal in the new world. Native Americans honed their skills of luring waterfowl into bow range with handmade decoys. The Native American’s technique of hunting on the water combined with the settler’s powerful firearms yielded a new way of waterfowl hunting on the Susquehanna.

For generations, the flats provided additional opportunities in the spring and fall for protein and sustenance. The Atlantic Flyway’s consistent migration pattern and abundance of waterfowl facilitated human settlements to grow and thrive along the shores. 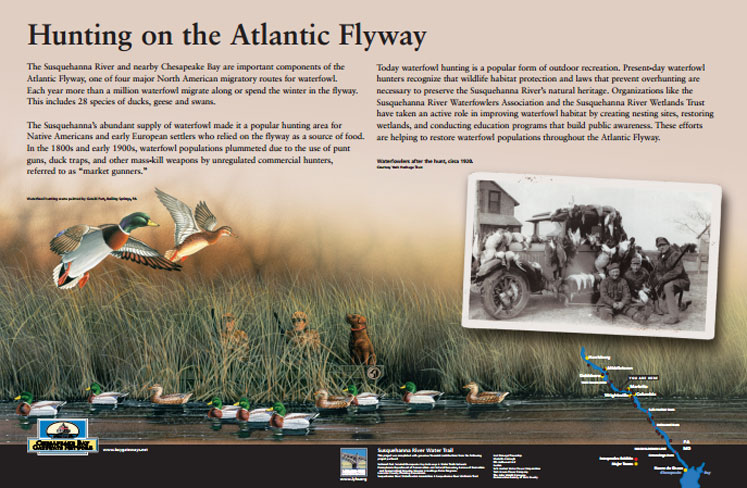 Learn about the birds that use the Conejohela Flats. Click on a bird to go directly to their Audubon page. Check out the songs and calls section that has audio files of each bird!

Sit back and enjoy the show. A high diversity and abundance of species to enjoy makes the Conejohela Flats among the top-ranking areas in Pennsylvania for bird watching. The flats can be viewed from shore with a pair of binoculars. You’ll likely see many birds soring overhead during your visit.

Want to the see the Flats from above? Hike the Turkey Hill Trail to overlook this important birding area.

Check out the Conejohela Flats Paddle Brochure for a unique way to visit the flats by paddle boat.

Discover and explore other local stopover sites on the Atlantic Flyway in this LancasterOnline article.