For National Poetry month, SNHA is featuring notable Columbia resident, Lloyd Mifflin, known for his success in the arts. His story is that of a talented painter and poet, whose love of the local native landscape was reflected in his work. Mifflin’s Susquehanna river scenes have served as representation of the Susquehanna River corridor’s exquisite natural beauty to the rest of the world. His poems convey a love affair with the river landscape. More celebrated for his poetry than his art, he was acclaimed as “America’s Greatest Sonneteer.” His legacy left his mark on the region and continues to captivate visitors 100 years after his death.

Lloyd Mifflin was born on September 15, 1846 to John Houston Mifflin and Elizabeth Ann Bethel Heise in an elegant 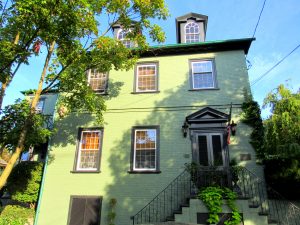 brick Federal-style townhouse on Walnut Street in Columbia, Pennsylvania. The Mifflin’s lived comfortably in their townhouse in Columbia, built by the Bethel family. They summered at their country estate, Norwood, just outside of Columbia on a hilltop overlooking the Susquehanna River. John Houston Mifflin built Norwood, named after the Mifflin’s family home in Warminster, England in 1850.

John Houston Mifflin raised his family in the virtues of old-fashioned chivalry, to be upholders of the American upper-middle class Victorian establishment. Lloyd Mifflin had a happy childhood, enjoyed a comfortable life, and never wanted for anything. In the Mifflin household, art and literature were important. Lloyd’s father was an amateur poet and had studied at portraiture at The Pennsylvania Academy of Fine Arts. He encouraged Lloyd to think for himself and develop his own tastes. Lloyd was sent to nearby country school in Norwood then attended the public schools in Columbia, although most of his education came from private tutors.

Lloyd was one of three children that survived to adulthood. Lloyd’s mother died when he was just eight years old. Elizabeth Ann Mifflin was buried in Mt. Bethel Cemetery in 1855. After his wife’s death, John Houston Mifflin inherited extensive land and financial holdings in Columbia. He gave up his art career to become a successful land developer and businessman.

Lloyd was drawn to the Susquehanna early in life. He grew up on the riverbanks drinking in the natural wonders of his local landscape. Mifflin developed a deep love of the Susquehanna river and spent most of his free time among its natural beauty reading his favorite poets or adventuring with friends. He developed a passion for the arts and a love of poetry. By age 14, Lloyd decided he wanted to be an artist.

Acquiring talent and skill from his father, Lloyd continued to develop as an artist. He studied under Thomas Moran in Philadelphia from 1869 to 1870. Moran would go on to become famous for paintings of western mountains. Lloyd began to fall in love with landscapes. In 1871, Mifflin traveled the Susquehanna River from its source in Lake Otsego, Cooperstown, New York to Chesapeake Bay, making sketches of Pennsylvania towns and bridges during his journey.

The following year, Mifflin left for Europe where he studied the great masters in the galleries throughout Europe. During his European tour, he learned from many successful artists of the time. He studied various landscapes and acquired a much more sophisticated use of color and light in his artwork. He returned home from Europe in 1873 a far more talented painter. Mifflin had a special talent for skillful depictions of landscapes with radiating light from the center of the picture that reflects off streams or objects. He was a master of tonality and luminosity.

He resumed his sketching expeditions, capturing the ageless beauty of Pennsylvania river valleys and towns. Lloyd Mifflin’s deep love of nature drew him to the Susquehanna time and time again. His “View of the Susquehanna Looking Toward Turkey Hill”, one of the first American scenes painted after his return from Europe, demonstrates his newly acquired skills. His best known and most widely admired works are those depicting the scenery of the Susquehanna River. He held a certain provincialism for his native region and refused to move to New York, even though Moran encouraged him to do so. During his lifetime, Mifflin did not need to sell his paintings to earn his livelihood. He lived a life of the landed gentleman that some described as a “highly sensitive, elitist dandy.”

Mifflin lived a style befitting a gentleman of means. He drove a coach-and-four, visited friends and relatives, “mixed with the very best sort of society”, and took up photography, creating thousands of glass-plate negatives and lantern slides. He developed into a good photographer over the years; the glass plate negatives served as photographic studies for his landscape paintings. Mifflin continued to take photographs until he suffered a heart attack in 1892. Convinced that the chemical fumes were harmful to his health, he gave up photography, although he continued painting sporadically.

John Houston Mifflin died in 1888. As oldest son, Lloyd inherited the Norwood estate and a large portion of the family’s real estate holdings. This included not only land but extensive rental buildings, many in prime locations in Columbia. He took up residence in his fathers’ Norwood estate and greatly expanded it in 1901.

In the 1890s, he was forced to give up the outdoor art of landscape painting due to continuing ill health, he focused on writing poetry that he had always enjoyed. Mifflin turned to poetry at the age of 51. He devoted his greatest efforts to the sonnet, considering it the most distinguished and exalted of all forms of English poetry. Mifflin aspired to write the perfect sonnet, a poem consisting of fourteen lines usually in iambic pentameter. He enjoyed the structure, lyrical beauty, the plan of metrical rhyme and diction. The rhyme schemes and diction include many metaphors and extensive use of vocabulary. 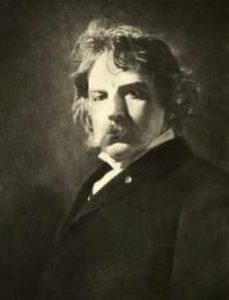 During his lifetime, Lloyd was widely recognized for his poetry. His work was very popular in England. His earliest commercial collection, “The Hills”, was published in 1896. He wrote more sonnets than William Shakespeare, John Milton, and William Wordworth in his lifetime. He published fourteen books, including 500 sonnets in his lifetime.

Mifflin never married; it is assumed that his work was his love. Through the years Lloyd was very generous in giving to causes, people and organizations. He donated paintings and books to be auctioned. He wrote many poems for organizations to commemorate special events. For years, Lloyd donated many of his books of poetry to colleges, libraries, and other institutions.

He suffered a stroke in 1915 while completing his last collection of sonnets, “As Twilight Falls”, which was published in 1916. He survived another 5 years before dying at his home on July 16, 1921. He was buried in the Old Brick Burial Yard within Mount Bethel Cemetery. He received honorary degrees in literature from University of Pennsylvania and Franklin Marshall College. Author, E. Hershey Sneath, wrote a book in 1928 that called Mifflin “the most prolific writer of sonnets in the history of English and American poetry.” The work was entitled America’s Greatest Sonneteer, which gave Lloyd the popular title, he is now known for. 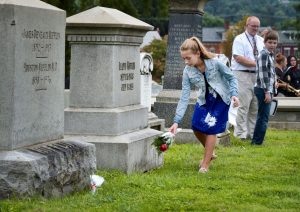 In his will, he bequeathed land to the Columbia schools on both sides of Taylor school for a playground, with the conditions the land is not developed and that a student from the school place a flower on his grave every year on his birthday. The first tribute began that September and the tradition continues today, 2021 marks the 100th year. Typically, various sonnets of his are read aloud, hymns are sung, and sometimes guest speakers are featured.

The Mifflin family also supported local education by bequeathing two houses from their estate, the cottage known as Norwood and the grand house, Cloverton, to be sold to benefit local schools.  Lloyd’s brother, Houston also donated land for a school playground. After Houston Mifflin’s death, a flower was also placed on his grave during the annual Lloyd Mifflin memorial ceremony.

Most of Lloyd Mifflin’s paintings that remained at the family summer home and were later acquired by the Pennsylvania Historical and Museum Commission. His drawings and manuscripts were acquired by Franklin and Marshall College in Lancaster, Pennsylvania. Many of his glass plate negatives remain in private hands, including one lot rescued from a refuse dump in Columbia.

This region was Lloyd Mifflin’s local landscape and his primary interest, as a boy, an artist, and a poet. The characteristics of his landscape paintings and the themes of many of his poems came from what he saw and experienced in his neighborhood. He left a legacy that showcases his natural talents, his passion and love for the Susquehanna, and generosity live on throughout the community he once called his home.

Want to learn more about Lloyd Mifflin’s well-known works? Read some of his river related poetry here. View the Visions of the Susquehanna exhibit is on display at the Zimmerman Center for Heritage or visit the State Museum of Pennsylvania, which holds the largest collection of Lloyd Mifflin paintings.

Take a scenic drive to view Norwood (511 Norwood Rd. Columbia, Pa) and Lloyd Mifflin’s Birthplace, the Cottage. (165 Walnut St. Columbia, Pa) Please remember these are private residences and do not trespass but view from afar.

Use the Mount Bethel Cemetery Brochure to locate Lloyd Mifflin’s gravesite and learn more about the annual memorial.