On its journey to the Chesapeake Bay, various rivers, creeks, and streams converge with the Susquehanna as it traverses the terrain. The Susquehanna River is one of the oldest and most important rivers in North America. Flowing 448 miles, the Susquehanna travels through three states: New York, Pennsylvania, and Maryland. The 28,000 square mile watershed is the longest commercially unnavigable river system in North America. The Susquehanna River Corridor provides an excellent glimpse of unique geological land forms. Providing ample opportunity to study a variety of distinct features and examples of geologic processes on display in Lancaster and York Counties.

Geology is everywhere beneath our feet.

The stories of the Susquehanna wind through time, influencing the lives of those who live along its banks and the landscape itself. On its journey, the river provides abundant resources and connects communities, flowing through ancient rock along the way. The Susquehanna is so old that the mountains and valleys formed around it, rather than the river shaping the valleys.  The river has witnessed mountain building and erosion as the land was shaped and then reshaped around it. Geologists have looked at the Susquehanna for explanations of the formation of the East Coast. It has always inspired visitors, many attempting to unlock the secrets of the Susquehanna.

Just like the river that cuts through them, every rock has a story to tell along the way. The geology of the Susquehanna River is a leading factor in its unnavigability. Even during times when other sections of the river were considered navigable, the Lower Susquehanna remained untamed. The river itself never served as a successful commercial waterway because of rapids and other obstructions. Despite many wholehearted attempts throughout history, nature has held its claim to this part of the watershed. Over time our communities and transportation routes have developed upon the sculpted landscapes, preserving undeveloped stretches of beautiful scenery and important resources along the watershed.

Every year visitors flock to the Lower Susquehanna to see the many geological wonders to be found on the river. We’ll focus on just a few of the most notable features found in the region.

Potholes and Sculpted rock in Falmouth

When the Susquehanna is low the rocks seem to come alive as sculpture-like shaped rocks emerge from the water and stretch across the river below the Conewago Falls in Falmouth, Pennsylvania. Discovered during extremely low water, this otherworldly landscape is one of the most expansive pothole fields uncovered in the United States. 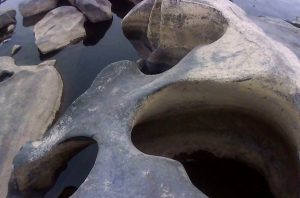 When the York Haven dam was completed in 1904, it was the third largest in the world. The dam follows an existing rock ledge, causing it to cross the Susquehanna river at an angle. Here the river drops 19 feet in 1⁄4 mile. It’s not surprising to find changes in rocks in the riverbed wherever you have a waterfall or otherwise rapid movement in the water. The rocks at the foot of the falls range in size and display various smooth, curvaceous shapes that captivate visitors.

The Conewago potholes and the sculpted rocks found here are composed of diabase, a hard igneous rock, the result of hardened magma emerging during continental drift 200 million years ago. Water and rivers are a major agent of erosion, shaping landscapes over time with the power of water and the sediment it is carrying with it. The potholes were formed as a result of the fast-moving water with the combination of sandy sediment creating underwater vortexes to swirl and carve out the round features in the rock. The igneous rock can withstand the weathering from the water, slowly creating the large smooth boulders… but the hard quartz-sand blasting away with tornado like force did a lot of the carving work, creating a truly unique example of erosion and weathering. 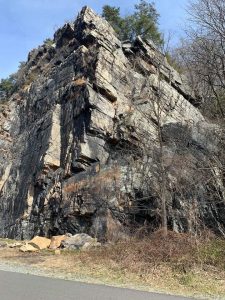 Chickies Ridge is composed of the uplifted Cambrian Chickies Formation, a mapped bedrock unit in Pennsylvania, New Jersey, and Maryland. It is named for Chickies Rock, a popular rock cliff just north of Columbia along the Susquehanna River. According to the United States Geological Survey (USGS), the summit of the ridge is 587 feet above sea level.

The Chickies Formation is described as a light gray to white, hard, massive quartzite and quartz schist with thin inter-bedded dark slate at the top. Originally the rock was sandstone, but heat and pressure changed the rock into a harder and denser rock. It is a rare metamorphic rock deposit with multiple faults, thrusts, dips, ripples and fossils that can be found throughout the formation. The surrounding rock in the valley was softer compared to the quartzite, leading the softer rock to be weathered and eroded away.

Relative age dating places the Chickies Formation in the Lower Cambrian Period, deposited over 500 million years ago. It was also during this time that the rock was pushed up into an arch. Geologists called this type of fold an anticline.The famous Chickies Rock cliff itself is a classic example. Overlooking the river, Chickies Rock is the largest exposed anticline on the East Coast.

The Susquehanna Gorge formation starts to take its shape south of Columbia, Pa. Below Turkey Hill, the Susquehanna River is funneled to Port Deposit, MD through a deep canyon-like gorge carved into the ancient rocks of the Piedmont. The river is squeezed through the quarter mile gorge while dropping sharply, roughly 6 feet per mile. On the flat bottom of the 40-mile-long gorge are 6 long spoon-shaped depressions, called the Susquehanna Deeps. These deeps first appeared on Latrobe’s map, derived from his 1801 survey.

During the construction of the Holtwood dam in 1909 some of the deep were exposed, prompting more extensive studies of the depths of all 6 of the Susquehanna Deeps. Some of the deeps are over 100 feet deep, their deepest portions extending below sea level. 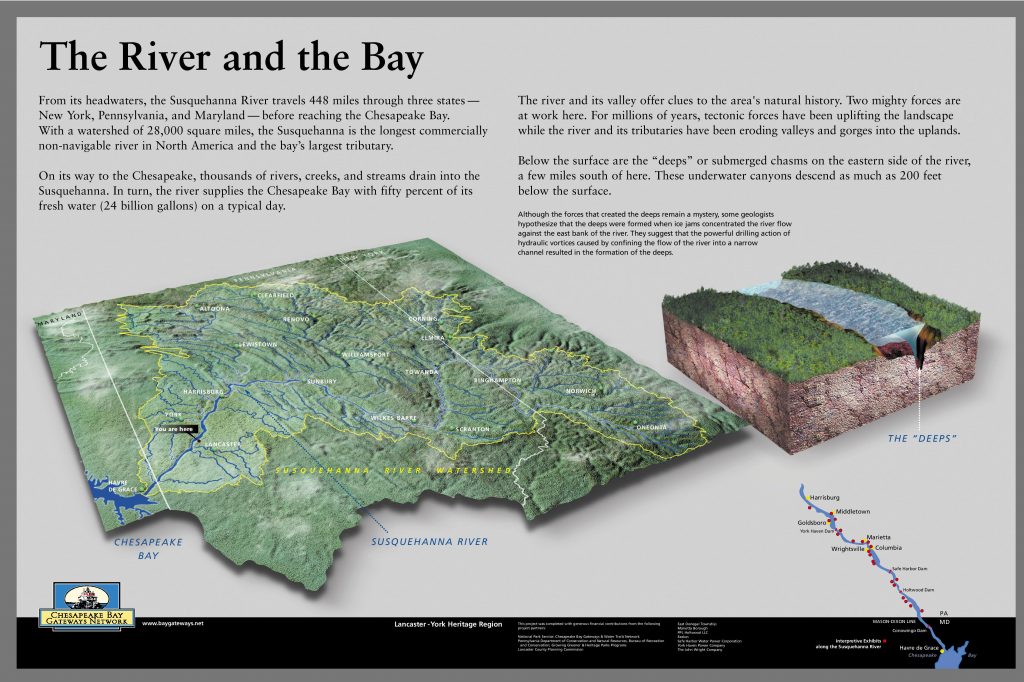 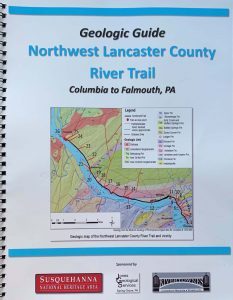 Learn more about the geology of the Lower Susquehanna

Want to visit the Conewago Potholes?  They are best viewed when water is low during the late summer and early fall. Parking is available at the Falmouth Access.