For Women’s History Month, SNHA is featuring Susanna Wright. A brilliant, innovative Quaker, who contributed to the colonial settlement of Columbia along the Susquehanna. In an age when women were expected to marry and comply to the orders of the male members of the family, Susanna remained unmarried and pursued a variety of scholarly interests. Her story is that of a remarkable woman, who thrived on the frontier and became well-known as a poet and pundit, botanist, business owner, and scholar.

In 1697, Susanna was born to Quaker parents, John and Patience Wright, in Lancashire, England. She was the oldest of eight children. Her parents emigrated to the Philadelphia area of the Pennsylvania colony in 1712, while Susanna followed in 1718 after completing her education. Susanna’s mother died in 1722 forcing Susanna to take charge of the household responsibilities.

In 1730 her father John settled the family on the banks of the Susquehanna and began operating what became known as Wright’s Ferry. Joining the Wrights were Robert Barber and Samuel Blunston, fellow Quakers who had also resided in the Philadelphia area. In 1738, Susanna’s brother James Wright built a family home, the Wright’s Ferry Mansion, which remains a local landmark in Columbia, PA. Colonial officials were happy to have Quaker allies on the Susquehanna as the west side of the river was disputed territory between Pennsylvania and Maryland. Susanna created an island of genteel English culture in a primitive wilderness of Scots-Irish and German settlers as well as Native Americans.

Along the Susquehanna, Susanna ran a large agricultural operation while her father tended to the burgeoning ferry business. In the 1740s, Susanna moved to the nearby Bellmont Mansion as it had been bequeathed to her from Samuel Blunston. This gift was incredibly important, because under the English practice of coverture Susanna would never have been able to be truly independent. The gift gave Susanna the financial security she needed to stay a single and independent woman when her father died in 1749 and left his estate to his sons.

Susanna was interested agriculture and used the farm to raise a variety of crops including hops, hemp, flax, and indigo. She also had an orchard and used her garden to experiment with native and European plants. She became familiar with herbal remedies and medicines, which she was frequently called to dispense to her ailing neighbors. Through her correspondence with Benjamin Franklin we know that she successfully grew apples – Spitzenburgs and Pippins were her favorite varieties.

Susanna’s most remarkable contribution to agriculture was her successful efforts in producing silk. In North America, silk production had been limited to the southern colonies. Susanna developed a method that allowed the silkworms to spin in specially created paper cones. The coolness of the climate made it difficult to handle silkworms after they emerged from their cocoons. Despite this difficulty, she did find some success. In 1759, Susanna’s effort resulted in a pair of silk stockings. They were presented to General Jeffrey Amherst, the commander of Britain’s forces in America during the French and Indian War. By 1771, the Philadelphia Silk Society awarded her a prize of ten pounds for the largest number of cocoons raised by a single individual. That silk was reportedly used to make a court dress presented to Queen Charlotte by Benjamin Franklin.

Susanna kept up with political debates on the eastern seaboard through correspondence. She regularly communicated with political elites like Isaac Norris, James Logan, Benjamin Franklin, and Benjamin Rush. She became a prothonotary or principal of the court for the Susquehanna River settlement, drafting legal documents including land deeds, indentures, and wills.  Known for her good judgement and integrity, she was also called upon to settle disputes – especially between settlers and Native Americans.

Benjamin Franklin sought Susanna’s help in outfitting the Braddock Expedition of 1753 during the French and Indian War. She suggested calling together the township leaders to discuss gathering provisions for the endeavor. Franklin took her advice and successfully gathered 150 wagons as well as horses and provisions from Lancaster, York, and Cumberland Counties. He also sought her advice in dealing with the Paxton Boys massacre of December 1763. In early 1764, Susanna wrote to a Lancaster merchant that vigilantes were still roaming the region threatening not just Native Americans but those that supported and helped them, including her brother James Wright. Her location along the Susquehanna was a gateway to the frontier, which made her a valuable asset for information to Philadelphia’s elite political leaders.

In quieter times, Susanna’s correspondence to friends in Philadelphia was more intellectual. She exchanged books with Logan, Franklin, and Rush. From her European education, Wright was fluent in French and versed in Latin and Italian. Literature was her constant delight, and she confided to Benjamin Rush that she could not live without her books. James Logan was known for having an immense library and regularly shared books with Susanna. In a surviving letter from James Logan, he complains that Susanna is slow to return the books he loaned her.  However, they had a close relationship in which they shared writings, asked for critiques, and experimented with poetic form. Wright had many relationships like the one she shared with Logan.

She belonged to an informal group of male and female writers in the mid-Atlantic. The female members included Hannah Griffitts, Milcah Martha Moore, Elizabeth Graeme Fergusson, and Deborah Norris Logan. Her contemporaries referred to her as the “Susquehanna Muse”. Deborah Norris Logan noted that Susanna did not write for fame and never kept copies of her work. Therefore, only about three dozen of her poems have survived. Her works were never published; instead she circulated her verses amongst her friends. Many were found in Moore’s commonplace book, a compilation of poetry and prose in which Susanna is one of the three dominate female contributors. Wright’s poems cover a wide breadth of themes like justice, time, death, immortality, friendship, family, and marriage. In a poem titled ‘To Eliza Norris—at Fairhill’, Wright meditates on the status of women in the eighteenth century. Her meditation concerning the inequality of women to men is one of her most analyzed poems. 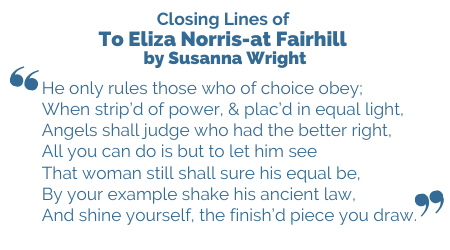 Susanna’s reputation had grown so much by 1784 that Rush mentioned in his journal that he had met “the famous Suzey Wright a lady who has been celebrated Above half Century for her wit–good Sense & valuable improvements of mind.” Later that same year, Susanna Wright died at age 88. She was a unique and valuable contributor to colonial life in Pennsylvania. Her relationships connected her to important decisions in the colonial capital of Philadelphia. Her relentless energy to grow and better understand horticulture helped her community along the river and across the ocean. Her writings and poetry showcase a brilliance and passion that still inspires. In the 88 years of her life, Susanna took part in the transformation of Pennsylvania from a frontier colony to a prominent state in a fledgling nation.

To learn more about Susanna Wright:

Check out The Extraordinary Suzy Wright: A Colonial Woman on the Frontier by Teri Kanefield. This great book is well illustrated and geared towards young readers (ages 8-12).

Take a tour of the Wright’s Ferry Mansion located at Second & Cherry Streets. Open May through October on Tuesday, Wednesday, Friday and Saturdays from 10:00 to 3:00 (last tour begins at 3:00). There is a great video about the preservation of the home and its collection on Vimeo by Natural Light Films.

Find another short biography of Susanna Wright and more learning resources for K-12 educators can be found at Women & The American Story from the New York Historical Society & Library.