Visions of a Susquehannock Settlement

Over the past year, Zimmerman Center for Heritage staff have worked to transform one of the center’s galleries into a space honoring and presenting the history of the Susquehannock people. As part of our effort to focus on the people rather than their artifacts, SNHA engaged artist Carol Oldenburg to create a large-scale painting representing how today’s Native Lands County Park may have looked in the late 1670’s, when it was the site of the Susquehannock’s principal community.

The Susquehannock had been living in the lower Susquehanna River valley for more than 100 years before coming to Native Lands. From their arrival in the mid-1500s to the mid-1600s, they utilized the fertile land on the Lancaster County side of the river for the extensive fields needed to grow the crops that supported their large communities. Eventually their farmland and nearby resources would become depleted, and their longhouses would be falling into disrepair, so after about 25 years they would create a new community here in their heartland.

Captain John Smith met Susquehannock representatives at the head of the Chesapeake Bay in 1608. Within 50 years, the Susquehannock were experiencing devastating losses. Deaths from epidemics of smallpox and other diseases resulting from contact with Europeans, and conflicts with other Native groups seeking to gain control of the Susquehannock trade route resulted in the loss of 2/3 of their population. They made the decision to create a new settlement across the river in today’s York County, putting distance between themselves and the increasing European presence. The Susquehannock occupied their first York County settlement–referred to archeologically as the Upper Leibhart site — from about 1665 until 1675 when they were forcibly removed by the Seneca. The Susquehannock fled to Maryland and for a time occupied an abandoned Piscataway fort. After being blamed for violence against Virginian colonists, they were given permission in 1676 to return to their Pennsylvania homeland, where they created the community on the hill overlooking the river that is now Native Lands County Park.

Grounded in information gathered through archeological excavations of the Native Lands settlement conducted by the Pennsylvania Historical Museum Commission in 1970, Carol Oldenburg’s painting reveals details of Susquehannock culture that go far beyond what can be gleaned from looking at maps, timelines, and artifacts. Her work is a window into their lifestyle and their Native Lands home.

The Susquehannock community is shown prominently occupying the hill overlooking the Susquehanna River. The 16 longhouses within the stockade are home to approximately 900 people. The town bustles with activity.

In the foreground, women and children are shown tending to perhaps 150 or more acres of farmland that surrounded their settlement. The Susquehannock were of the same culture as the Haudenosaunee (Iroquois) of the Finger Lakes region of New York. Within Haudenosaunee culture, women tended the fields and cared for the household. The depiction of the two women and young girl symbolizes the ingenious method of farming practiced by the Susquehannock of growing corn, beans, and squash all together in the same field. Beans fixed nitrogen into the soil, providing an essential nutrient for the corn and squash. The corn provided a stalk for the beans to grow upward towards the sun, and the shade created by the leaves of the squash held moisture in the soil and deterred the growth of weeds. They called these plants “the Three Sisters.” To the left, a child reaches high to pick an ear of corn from the plant he grew. 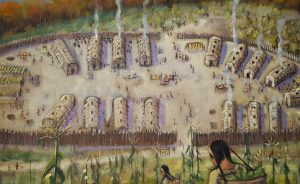 Being both a matriarchal and matrilineal society, women ruled the longhouse. Multiple families would live in one longhouse, and generally were related through the mother’s family line. Sons lived within this extended family household until they married, upon which time they would move to their wife’s family’s longhouse. Men lived in the house at the discretion of the women and could be forced to leave at any time. Women and men had equal say in deciding issues important to the community.

In the background, Susquehannock men are shown on the river attending to their fishing weirs (traps), gathering in the river’s bounty of eels on their fall migration from the river to the bay and open sea. In Haudenosaunee society, men did the hunting and fishing, and facilitated political discourse.

The Native Lands settlement would likely have existed as long as their past settlements. However, in 1680, after living here for only four years, they were forced from this area by the Haudenosaunee (Iroquois). Many Susquehannock were assimilated into the Seneca, Cayuga, and Oneida nations in New York.

In the early 2000s, the location of the Susquehannock’s last traditional settlement faced the threat of land development. As a result of extensive efforts by Native American groups, archeologists, and conservationists, development plans were thwarted, and in 2009 the site became Native Lands County Park, the only publicly accessible Susquehannock settlement site in the their heartland. SNHA played an important role in preserving this important site, and now helps tell its story. A mile-long interpretative trail through Native Lands begins at the Zimmerman Center. At the trailhead, visitors can pick up a guide keyed to waypoints along the trail to stop and learn the history of this special place.

Carol Oldenburg is known for her award-winning landscapes. Her paintings have been included in curated and juried exhibits in galleries and museums across the country at such places as Sue Greenwood Fine Art in Laguna Beach, CA; Delaware Center for the Contemporary Arts; and Carla Massoni Gallery, Chestertown, MD. She currently lives in York, PA where she has established OMG STUDIOS with her daughter, Kara Oldenburg-Gonzales, in downtown York’s Royal Square District. Carol’s art can be found in the permanent collections of the State Museum of Pennsylvania and the Pennsylvania State University. You can learn more about Carol and view her work at http://www.carololdenburg.com/

A great read for Thanksgiving, Jack Weatherford’s “Indian Givers” tells how contributions of the American Indians transformed the World.

Other places to visit include the Conestoga Area Historical Society, the Lancaster Longhouse, and the State Museum of Pennsylvania

Watch the educational video Appreciating the Three Sisters produced by the Jose Barreiro and Rich Brotman for The Indigenous Preservation Center, to learn more about this method of indigenous farming.

Search the Iroquois Museum’s Learning Longhouse resources to learn more about the culture of the Haudenosaunee.

Barry Kent’s “Susquehanna’s Indians” is the authoritative work on the Susquehannock people as viewed from a historical and archaeological perspective. Find it in our Online Store or buy in-person at the Zimmerman Center.